Candy Cave is a Happy Tree Friends Flash game published on the Mondo website. This game is an endless runner starring Nutty.

Feed Nutty’s candy cave by having him grab candy in a cave! Enable his addiction now![2] 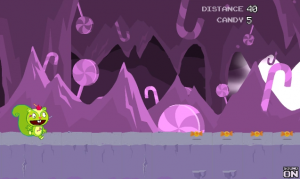 After the game starts with a "Ready... Go!" prompt, Nutty moves forward automatically throughout the titular cave as he encounters candies and obstacles like puddles, rocks, small craters, and gaps. The player uses the mouse button to make Nutty jump. Holding the mouse button longer will make him jump higher.

Candies and obstacles are placed randomly. Candies are the collectibles Nutty can simply pick up by touching them. Picking up enough of them will trigger a level bonus which will change the cave's background color, speed Nutty up, and impact the player's final score. Obstacles include puddles, rocks, craters, and gaps. Puddles will make Nutty slip, while rocks and craters will make him trip, which hinders him from making any jumps briefly. Open gaps lead to deep pits and will end the game if Nutty falls off.

Upon getting a game over, the final score is determined by the distance traveled, candies collected (multiplied by 10), and the level bonus multiplier. 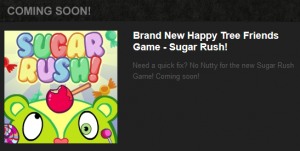 Candy Cave teaser from the Mondo Newsletter, back when it was known as Sugar Rush!.

Candy Cave was first teased on the October 26, 2012 Mondo Newsletter for people who were part of Mondo's e-mail subscription. The game was going to be titled Sugar Rush!.