False Alarm features a Happy Tree Friends short movie that is first played upon accessing Story Mode for the first time. However, the movie ends halfway through. As the game explains, the player has to complete all 10 zones and earn at least one Gold Award in the junkyard zone in order to unlock the rest of the movie.

The full game cost $19.99 or 400 Microsoft Points (originally 800[2]), but a trial version was available that lasted up to 2 hours. On Xbox LIVE Arcade, the game was available for all Xbox LIVE regions except Japan, Korea, and Taiwan.[2]

The cute, cuddly Happy Tree Friends meet with one horrible, twisted disaster after another and only their friend Lumpy can save them! Armed with a helicopter pack, Lumpy hurls flaming napalm or explosive nitro to blow open areas where his friends may be trapped, or puts them into a deep freeze if they're about to walk into danger. And that's just the beginning. The creators of the popular TV series deliver all the gory yet comedic action the series is best known for in 10 exclusive disaster-filled scenarios, each with three frantic levels and all-new Happy Tree Friends video content. Help save the accident-prone friends from ultimate disaster!

For the Steam release, the minimum system requirements were:

The message after viewing the included movie for the first time. 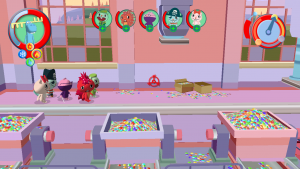 False Alarm can be played with either keyboard and mouse or an Xbox 360 controller. The player is represented by Lumpy, while 5 out of 7 other Happy Tree Friends characters appear in a level as victims that need to be rescued. The Happy Tree Friends move automatically towards the destination located at the end of a level. However, obstacles can impede or outright kill them. The player, however, has four abilities that can be used to manipulate either the level environment or the Happy Tree Friends' movement:

In a level, the player controls a colored reticle (nicknamed "rescuer aim") on the screen and the camera. The reticle is used to point at any part of the level, but if a suitable ability is used, an object can be affected. This is indicated by the object pulsing. The reticle's color depends on the ability currently selected, so a blue reticle means the player currently has the Water ability active, yellow is Nitro, red is Fire, and green is Action. Holding down the use button can amplify an ability's range, but this is limited by the blue gauge located on the left of Lumpy, meaning that overusing it will make the gauge take longer to recharge.

The Happy Tree Friends walk by default. Leaving them frozen or exposed to certain debilitating hazards will stop their movement. Placing Fire within their vicinity will make them run, increasing their movement speed. The Happy Tree Friends can also collapse briefly after using a lift, swim across safe liquids, or flung off using ramps (they cannot jump on their own). Environment-based hazards serve as threats to the Happy Tree Friends. Most hazards will cause a Happy Tree Friend to take damage, which is reflected on their respective red gauge (blue if health is less than 25%) on the damage indicator and their 3D models showing injuries. Some slow them down temporarily (a numeric timer appears on the affected character), some stop them in their tracks as they take damage (like being electrocuted), but some kill them regardless of their remaining health (like getting cut in half). If a Happy Tree Friend falls down a pit or gets caught in certain inescapable traps, though, they will respawn on nearby safe ground. The damage indicators on the HUD also change depending on the current state of the Happy Tree Friends. For example, a frozen over indicator means a Happy Tree Friend is currently frozen. An empty health gauge will show the character crossed out to indicate he/she is dead.

After a level clear, score is calculated based on the Happy Tree Friends saved multiplied by 5 (Rescue Multiplier) plus an additional multiplier depending on the Award attained (x3 for Gold, x2 for Silver, x1 for Bronze). Score from all levels are cumulated as Career Score.

On mouse and keyboard, the controls are as follows:

On the Xbox 360 controller, the controls are as follows:

Happy Tree Friends: False Alarm consists of 10 zones, each having 3 levels, thus giving 30 levels in total. The player only starts off with the Candy Factory zone and its first level, Better Choco-late Than Never, but more levels are unlocked with every new level clear until the very last Junkyard level, I've Got A Crush On You, where the player will be taken to the full version of the movie shown in the beginning of the game if the player has earned at least one Gold Award in any of the Junkyard levels. There is also an optional Tutorial level accessible from the main menu. As its name suggests, the player can learn the basic gameplay mechanics by playing a simple level with tutorial messages, ability indicators on objects, and only Flippy needing rescue.