This game is also available in Flash format on the official Mondo website, originally published on November 29, 2010 as part of the MiniBytes[5] collection before being re-uploaded on January 15, 2015. All interactions and scenes are handled in one window instead of separate videos as done on YouTube.

Help Lumpy with his card trick

Pick A Card and Remember IT

and now for the Magic! 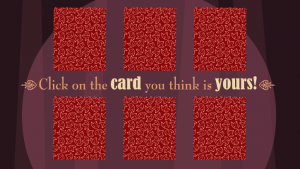 This game is more of an interactive video or Flash clip (a la Smoochies), as any choice picked will simply lead to a scene unique to the choice each before offering the player to play again.

Lumpy has six playing cards. Though the introduction captions told the player to pick one of them and remember it, there is no interaction on this part. Instead, interaction is done once the cards have been placed face-down. The player uses the mouse to decide on a card to be clicked. The cards are never placed randomly, and regardless of which card the player picked during the interactive part, the game will acknowledge whatever card picked as the one belonging to the player. Afterwards, a scene is played depending on the card, all of which involves violence typical of Happy Tree Friends.