This game is also available in Flash format on the official Mondo website, published on August 16, 2009. All interactions and scenes are handled in one window instead of separate videos as done on YouTube, but this version has a different ending.

It’s time to play Milk Pong! Make Lumpy drink by getting your ball in the cup! (And get your “Milk” ready so you can drink along)[4] 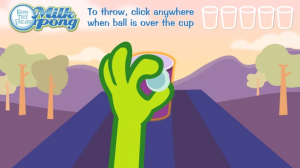 When a round starts, Nutty will move his hand holding a ping pong ball around the screen. Like the original beer pong, the player has to throw the ball into the cup so that the opponent (Lumpy) will drink (milk in this case) and proceed to the next round. This is done by clicking the screen when Nutty's hand moves over the cup, denoted by a glow around the cup whenever this happens (a changing annotation, which would take to an unlisted video representing the outcome, in the YouTube version). A scene will play after making the throw, with how the scene plays out determining the outcome of success or miss. If the player misses or takes too long throwing the ball, the game will offer the player to try again in the current round.

The game ends when all five rounds are successfully cleared, though the player is allowed to try again from the beginning.