Sugar High is a Happy Tree Friends Flash game published on the Mondo website. This game revolves around Nutty jumping on as many birds as possible to take their candy before the fall from extreme height kills him.

It’s Nutty’s dream come true! There’s been an accident at the nearby candy factory exposing the delicious sweets inside. All the hungry birds are swooping in and taking all the candy.[3] 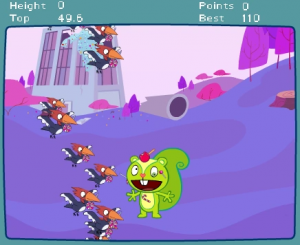 Sugar High is played with keyboard controls. The player can move Nutty left or right by pressing the left or right arrow keys, or make him jump by pressing the Spacebar. Nutty starts off on the ground, while the candy-carrying birds of various sizes fly by from left to right. Jumping on a bird will kill it and bounce Nutty higher. Height is measured starting from his first bounce until he falls back on the ground, at which point the height counter is reset and, if the height recorded is the new best by the player, it is kept on the Top counter. Points gained from candy collected (in multiples of 5) depends on the bird's size. The largest birds will reward the player 5 points each, while the smallest ones will reward 25 each. Similar to height, points are recorded starting from a successful bounce and are reset to 0 every time Nutty lands back on the ground. If the points recorded are the new best by the player, they will be kept on the Best counter.

The game is over if Nutty splatters on the ground upon falling, which becomes possible once the player breaks 40 Height in a single attempt, even if the player bounced on a lower bird to reach less than 40 after reaching said height. 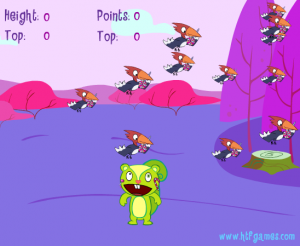 Jumping Nutty, a Happy Tree Friends Flash game produced by Christian Gull that serves as the basis for Sugar High.

The game is a remake of the previous fan game Christian Gull created titled Jumping Nutty. The same death animation error for the birds from Jumping Nutty is also retained in this game. There are a few differences in comparison between the two. 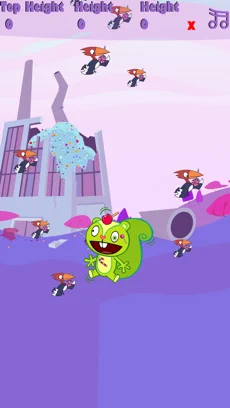