Going Overboard is a Happy Tree Friends Flash game published on the Mondo website. This game involves balancing Petunia on a lifesaver in the middle of the sea for as long as possible.

Avast, Mateys! The Happy Tree Friends have been forced to abandon ship over dangerous waters while sailing the high seas.[3] 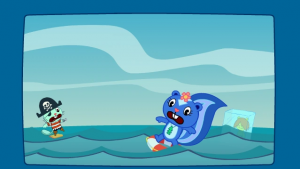 The game is played with a mouse. Petunia is balancing on a lifesaver, and she gradually tilts to either side. By moving the mouse, the player can move Petunia left or right to reorient herself. If Petunia tilts to either side too much, she will end up eaten by a shark.

The objective of the game is to keep Petunia balanced for as long as possible. 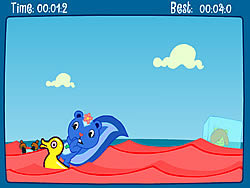 Petunia Balance, a Happy Tree Friends Flash game produced by Christian Gull that serves as the basis for Going Overboard.

The game is a remake of the previous fan game Christian Gull created titled Petunia Balance. Petunia's death is even reused from Petunia Balance, complete with the same "tailless" animation error. There are a few differences in comparison between the two.