This game was later taken down from both Google Play and iTunes, and was no longer playable on TreSensa's direct site, but can still be downloaded from Amazon. 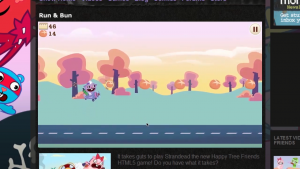 The game utilizes the touch screen controls (mouse clicks on the web version). As the play area scrolls indefinitely, by tapping the screen, the player character will either hover or jump depending on his/her mode of transport. For hovering characters, tapping and holding the screen will make him/her float up higher. Obstacles litter the play area alongside the collectibles. If the player hits an obstacle while not in an invulnerable state, the game ends.

Buns are the main collectible in the game and function as in-game currency to unlock more characters, levels, and powers. Normally, one bun is added to the total for every bun collected, but if a character matches his/her favorite level, the collected amount will be doubled. Powers appear in the form of special buns that grant useful effects from clearing all obstacles on-screen to pulling all nearby buns to the player for a short time. If the player wants to, they can choose to buy buns via the game's in-app purchases.

Upon getting a game over, the final score is determined from the distance traveled and buns collected in the current session.