On Thin Ice is a Happy Tree Friends Flash game published on the Mondo website. It is a puzzle game starring Russell.

Russell’s ship has wrecked and now a giant squid is hoping to make a savory snack out of him! Help Russell drop chucks of ice to skewer the sea monster instead. You’ll have to keep a cool head though, because it’s a good game of wits that will keep him out of Davie Jones’ lunch locker and turn that monster into squid-kabob.[2] 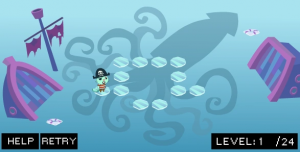 On Thin Ice is played with a mouse. According to the game's How to Play screen, clicking on one of the floating ice will make Russell jump toward it, sinking the one he previously stood on. Russell can jump toward a block of ice in front of him, to his left, or to his right regardless of the distance of the empty gap between them, but not behind him. He also can not jump diagonally. If there are no possible moves left, the player can click the Retry button to reset the current level, though the player has to watch Russell being torn apart by the giant squid first.

Clearing all the floating ice will allow the player to progress to the next level. There are 24 levels in total. Clearing the final level will show Russell holding a plate of cut-up squid parts, and the game will offer the player to play again from the beginning.