Hare Trigger is a Happy Tree Friends Flash game published on the Mondo website. Cuddles's cannonball scene from "Mime to Five" serves as the basis for the game's premise, which involves firing him from the cannon as far as possible.

Hare Trigger is played using the keyboard. At the start of the game, the player can angle the cannon Cuddles is in by pressing the up or down arrow key. If the player is ready, pressing the space bar will start the cannon's firing sequence, indicated by the moving bar at the bottom left corner of the screen. The dark blue part of the bar determines how powerful the cannon blast will be - the more of the bar is filled with it, the more powerful. Pressing the space bar again at this point will launch Cuddles. His trajectory is determined from the cannon's aim and blast power.

As Cuddles flies through the air, he will bounce off the ground, gradually with reduced airtime until he is unable to bounce any longer. Bouncing off trampolines or balloons will send him higher, thus allowing him to stay on the air longer. The player can also use the limited Blasts for the same effect by pressing the space bar after Cuddles is launched, though the player is only given two to use every new game. The player can recharge it by hitting gun powder barrels. However, Cuddles can be interrupted entirely when he lands on either the ducks or the shovel, killing him and thus ending the game immediately regardless of whether he can still bounce any further.

After the game over, distance traveled for the current play session will be displayed, as well as the furthest distance recorded from the player. 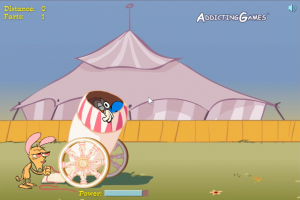