Happy Tree Friends: Strandead is a Happy Tree Friends video game developed by TreSensa, Inc. The game involves the player launching Giggles from a deserted island across the sea to reach the other side at 3,000 feet, all while avoiding obstacles and managing the limited usage of the fire extinguisher that she uses as aerial booster.

This game was later taken down from both Google Play and iTunes, and is no longer playable on TreSensa's direct site, but can still be downloaded from Amazon.

It takes guts to play Strandead the new Happy Tree Friends HTML5 game! Do you have what it takes?[5] 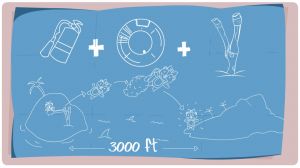 The game's story is an alternate scenario following the bus crash after "Happy Trails". The Happy Tree Friends Lifty, Shifty, Flaky, Lumpy, Handy, Sniffles, Flippy, and Giggles are stuck on a small deserted island, but there is still hope as they manage to spot a distant land across the shark-infested sea. Sniffles begins to design his blueprint as the Friends eagerly watch.

Once finished, it is shown that Sniffles's plan of escape involves the use of a fire extinguisher, a tube, and a chopped up tree to form a giant catapult that will launch a Friend across the sea, with the extinguisher serving as a boost. According to the blueprint, the distance between the island and the distant land is 3,000 feet. After the set of contraptions has been made, Sniffles points to Giggles as his test subject, to her dismay.

Giggles dies after her successful escape.

If Giggles successfully reaches 3,000 feet, her ripped up body (with one of her eyes out of its socket) is washed up ashore to said land. She is happy at first until Mole walks over and stakes his umbrella, impaling her right eye in the process. 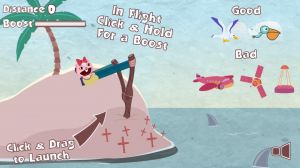 The game's starting point, showing the needed gameplay info for the player.

The game utilizes mouse (web) or touch controls (mobile). To begin the game, the player clicks/taps and drags the rubber tube holding Giggles, the direction of which determines launch speed and angle. Releasing the click/tap will launch Giggles. During flight, click/hold the screen to use the boost, which is limited in use (indicated by the Boost bar underneath the Distance counter).

As Giggles travels through the air, she will face birds and obstacles. The pelicans and seagulls are considered "good", which bounce Giggles higher to keep her in the air. However, if she flies too high, she will end up encountering planes and satellites which stun her, preventing her from bouncing on any birds or use her boost for a short time. Buoys are always located in the sea, but if she hits one, she is immediately killed, ending the game.

Other than the buoy, the game ends if Giggles can no longer stay on air (resulting in her eaten by a shark) or if she finally reaches 3,000 feet.

After a game over, a results screen is displayed with Sniffles. It changes depending the distance traveled in the current session.

Strandead was rated 3.9 out of 5 on Amazon, with mixed customer reviews. Some enjoyed the game, but some complained of the game being too basic for its own good. On the same site, the game managed to rank 51,935 as a best-selling Free game in the Apps & Games category. It was also ranked 3,679 as a best-selling Arcade Game.