Socks To Be You

Socks To Be You is a Happy Tree Friends Flash game published on the Mondo website. This game involves the player sorting Petunia's laundry of socks (and mittens) as quickly as possible before her hyperventilation kills her.

It’s Laundry day and Petunia’s Obsessive-compulsive disorder has gotten the best of her. Can you help her get through her episode before she completely loses it?[4] 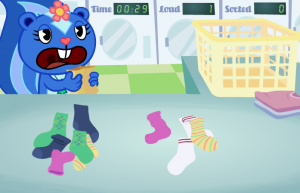 Socks To Be You gameplay.

Socks To Be You is played with a mouse. Pairs of socks varying in colors and patterns are scattered on the table, and the player has to drag them one by one into the basket located on the upper right. This is done by clicking on a sock and then moving the mouse while still holding down the left mouse button on the sock to drag it. The dragged socks will be cleared if they are the correct pair after being placed over the basket, otherwise a buzzer will sound and a red strike mark will appear. Petunia is shown hyperventilating as the game goes on, only sighing in relief briefly after a level clear. She begins blowing into her paper bag when the timer is under 20 seconds, but this intensifies when the timer is at the last 10 seconds.

The game is divided into 24 loads (levels). The player first starts with 5 pairs of easily-distinguishable socks and a 30-second timer. Clearing all the socks before the timer runs out will allow the player to progress to the next load, gradually adding more socks. The player will also earn a 30-second bonus to the timer every load clear. Higher load levels will have the player deal with multiple socks of a similar color scheme with minor differences in pattern. A total of 672 pairs of socks is the maximum amount the player can reach upon clearing the final load.