Disco Inferno is a Happy Tree Friends Flash game published on the Mondo website. This game involves Disco Bear showing off on the dance floor while picking up cool beats and avoiding flaming notes.

Disco Bear sure does love to shake his groove thang! Strut Disco-Bear around and catch the cool beats. Beware the broken, flaming notes. Try to be king of the dance floor before your time on stage is up![3] 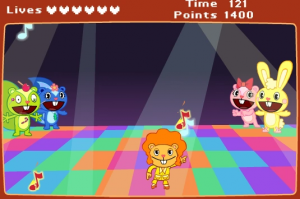 The game is played with a mouse. Disco Bear will move around the dance floor according to the mouse movement. As the 140-second timer ticks down, music notes rain down the play field. Disco Bear can pick up the "cool beats" for points, but hitting the broken flaming notes will gradually damage him. The game ends either after the timer ran out or after Disco Bear hit six flaming notes.

Crazy Disco, a Happy Tree Friends Flash game by Christian Gull that serves as the basis for Disco Inferno.

The game is a remake of the previous fan game Christian Gull created titled Crazy Disco. There are a few differences in comparison between the two. 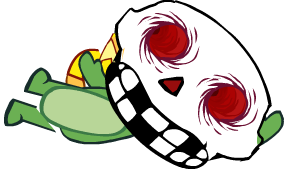 The unused frame depicting a dead Lifty that remains in Disco Inferno.

An unused frame depicting a dead Lifty (with some of Disco Bear's graphics underneath it) from Crazy Disco is still in the files of Disco Inferno.