Stay On Target is a Happy Tree Friends Flash game published on the Mondo website. It is a knife-throwing arcade game (albeit with darts instead of knives) featuring Lammy, Petunia, or Giggles as the character strapped to the spinning wheel.

Take a spin with Petunia, Giggles or Lammy on the wheel of misfortune! Do you have what it takes to hit the mark?[2] 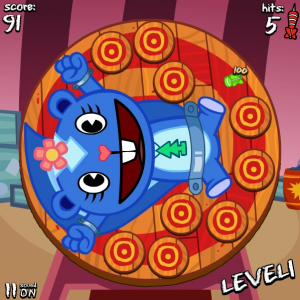 Stay On Target is played with a mouse. The player is given a choice of three friends (Lammy, Petunia, or Giggles) to be placed on the giant target wheel. After picking a friend, the game begins. Clicking on the play area will make the player throw the dart on the specified point. There is a short cooldown between throws, indicated by the red dart icon on the upper right corner recharging after a throw.

Small targets are placed on the wheel for the player to earn score from. Score earned depends on where on the target the dart hits. The base score is 100 points for a normal hit, 300 points for a "Great!" hit (closer to the center), and 500 points for a bullseye. A target disappears after it is hit. Clearing all targets will advance the player to the next level with a new batch of targets, multiplied (by level) score per successful hit compared to the previous level, an increased spinning speed, and a change to the spinning direction. As the player progresses through levels, the wheel may even randomly change its spinning direction mid-play.

The player is only allowed up to five blunders before the game ends. A blunder is caused by the player throwing the dart either outside the giant wheel or at the selected friend strapped to the wheel. Once the game ends, the player's total score is shown, calculated from the match score, level bonus (2,000 points per level reached), and bullseye bonus (1,000 points per bullseye hit).

The chosen friend influences the target size and formation on the spinning wheel. Lammy and Giggles share the same target size and number of targets per level (7), while Petunia has smaller targets and the most targets placed on the wheel (at 10).