Aim to Freeze is a Happy Tree Friends Flash game published on the Mondo website. The short "Strain Kringle" serves as a basis for the game.

Have a ball escalating the arms race in this cold war. Show “snow” mercy because revenge is a game best served cold![2] 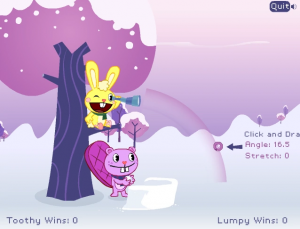 Aim to Freeze gameplay from Toothy's side.

The game uses a mouse. Move the cursor to decide on where to aim the player's snowball. Click and drag the cursor to decide the Stretch power, after which releasing the mouse button will make Toothy or Lumpy throw the snowball, where the snowball lands are determined by the throw Angle and Stretch power. Hitting the opponent with the snowball will add one point to the thrower's win count. If the opponent is hurt three times, he will freeze and then shatter, ending the game. The opponent's position is random every round. Other than the opponent, there are buckets of water that freeze any snowball thrown into them, giving the character that pulled it off another chance to throw using the frozen snowball. If this snowball hits the opponent, he will die immediately regardless of how many hits he received prior. 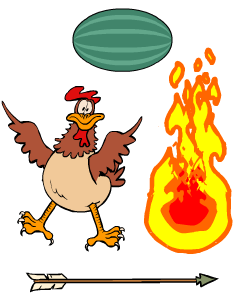 A sample of unused Ren & Stimpy's Robin Hoek sprites remaining in the game.

Aim to Freeze is a reskin of Ren & Stimpy's Robin Hoek, which shares the same gameplay. Decompiling the Flash file for Aim to Freeze shows unused sprites from Robin Hoek. Toothy and Lumpy are stand-ins for Ren and Stimpy respectively, the snowballs replace arrows, and the water buckets replace the torches. Despite this, there are still differences: