Spin Fun (or SpinFun) was a Happy Tree Friends cellphone game developed by Daydream and published by Kiloo[1] under license by Signatures Network.[2] This game is based on the episode "Spin Fun Knowin' Ya!".

From the Instructions provided in-game:

Time to try out the merry-go-round at the playfield!

Lumpy is ready to spin the animals - something might just happen if he spins the merry-go-round too fast.

The player can pick either Giggles, Cuddles, or Toothy to be placed on the merry-go-round, which is spun by Lumpy. To spin the merry-go-round, press the left joystick or tap the "4" key repeatedly. This fills a gauge on top of the screen that will determine the power of the launch, which is done by pressing the fire button or the "5" key. After the Friend is launched, he/she will bounce a few times, taking damage from items scattered around the playfield if he/she hits them. The more damage inflicted, the higher the score. Certain items can bounce the victim further for more chance of scoring. Once the victim stops moving, the game is over.

The player can watch the replay upon getting a game over by picking "Show replay".

This lists the items that can be found around the playfield. The player starts with only a few items, but can unlock more by getting enough minimum required score using specific victims in one play session. Unlockable items are character-specific, meaning an unlockable item associated with a certain character will not appear if the chosen victim is any other character (e.g. no crocodiles will appear if the chosen victim is not Giggles). 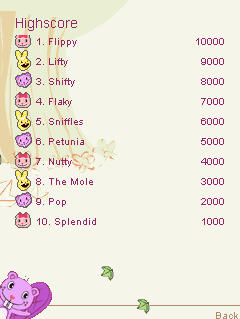