Hot Potato is a Happy Tree Friends Flash game published on the Mondo website. This game involves the player juggling a grenade for as long as possible without letting it hit the floor.

It’s a pot-luck party and everyone’s decided to bring something to share! Flippy has shown up with the baked potatoes… only he’s made his own bombastic substitutions to the recipe.[3] 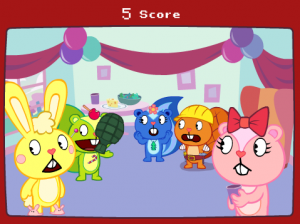 Hot Potato is played with a mouse. A grenade is dropped on the play area. Clicking on it once will make it bounce, after which the player has to keep it juggled without letting it hit the floor. A successful click on the grenade is worth 1 point.

The objective of the game is to score as much as possible before the grenade hits the floor and kills all the guests. 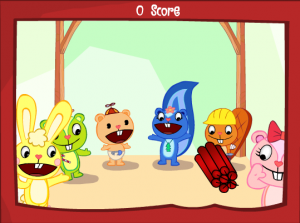 Dynamit (or Dynamite for the mobile version), a Happy Tree Friends Flash game produced by Christian Gull that serves as the basis for Hot Potato.

The game is a remake of the previous fan game Christian Gull created titled Dynamit. There are a few differences in comparison between the two.