Tightrope-A-Dope (stylized as TIGHTROPE-A-DOPE) is a Happy Tree Friends Flash game published on the Mondo website. This game revolves around Lumpy walking on a tightrope while dealing with bad weather.

The Amazing Lumpy is performing his death-defying, high wire act to thrill and delight his audience. Unfortunately, Lumpy’s act didn’t include bad weather.[3] 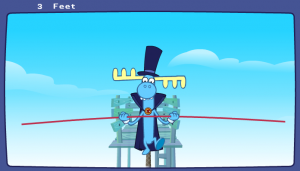 Tightrope-A-Dope is played with a mouse. After clicking on Lumpy to begin the game proper, moving the cursor on either side of Lumpy will make him tilt towards that direction as he walks on the tightrope. As the description mentions, bad weather is the main obstacle in this game. Once it starts, four buckets magically appear on Lumpy's balance pole. The rainwater filling the bucket(s) will influence Lumpy's balancing, requiring careful mouse movement to adapt. The filled bucket(s) can also spill out on their own. If Lumpy tilts to either side too much, he will fall off the tightrope and, upon landing on the ground, get impaled by his own balance pole before he is fried by lightning strike. 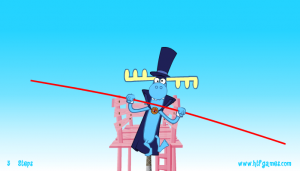 Lumpy Artist, a Happy Tree Friends Flash game produced by Christian Gull that serves as the basis for Tightrope-A-Dope.

The game is a remake of the previous fan game Christian Gull created titled Lumpy Artist. There are a few differences in comparison between the two.